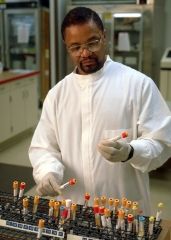 The rounded bottom is an integral design feature that minimizes loss when pouring from the tube, eliminates corners that might be difficult to clean, and evenly distributes the heat when the test tube is held over a flame. Unfortunately, this same feature prevents test tubes from standing unsupported.

Test tube racks support test tubes in vertical wells that prevent the tube from tilting. Some test tube holders feature wells with a very narrow tolerance and hold test tubes securely in vertical position. Other racks have wells with larger diameters and allow the tubes to tilt slightly without spilling their contents.

Early test tube racks were also designed with wooden pegs over which upturned test tubes could be placed to drain completely after washing. The use of disposable plastic test tubes and open bottomed wire racks has nearly eliminated this feature in all settings other than student laboratories.

While a few empty test tubes can be transported in the hand or in the pocket of a laboratory jacket, safe transport of larger quantities of tubes, or tubes that may contain hazardous chemicals, requires the use of a test tube rack. Modern laboratories frequently use large batches of test tubes when running comparative tests or collecting multiple samples, and the need to safely and efficiently move multiple test tubes at one time is a common occurrence. It is also quite common for the contents of test tubes to be hazardous laboratory chemicals. 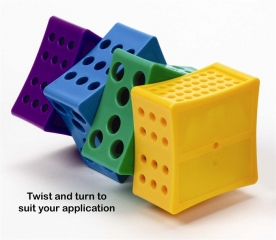 Some types of test tube holders interconnect to increase the number of tubes they can carry. Others are designed to be stackable for ease of storage when not in use. Test tube racks and holders are available to meet any experimental need or laboratory design requirement.