Are you using a YAG laser in your medical facility? YAG (which stands for yttrium aluminum garnet) lasers were first developed in the 1960’s and serve as a popular laser for a multitude of medical procedures and treatments today. 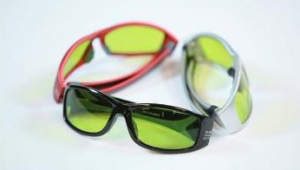 The most common types of active laser mediums in YAG lasers are the Nd:YAG (Neodymium-doped) and ER:YAG (Erbium-doped) in the medical setting. The Nd:YAG laser is used in many surgical exams, including the following medical applications: treatments in ophthalmology, acute angle-closure glaucoma, and diabetic retinopathy, along with skin treatments, laser hair removal, hysteroscopy, and onychomycosis treatments.

Er:YAG lasers generally emit light within a wavelength of 2940 nm, which is considered infrared light. Er:YAG lasers are commonly used for laser skin resurfacing, treating acne scarring, wart removal along with oral surgery, dental treatments and otolaryngology. This specific type of laser has the diverse ability to perforate bone as well as soft tissue.

Since YAG lasers are commonly used in many medical applications, it is important to be aware of the harmful effects it can produce. Safety measures need to be enforced when working around any YAG laser, so Yag Laser Glasses are a must. The laser safety glasses should match the operating laser to provide the highest eye protection. You can find the laser frequency ranges in your laser manual or by consulting with your facility’s laser safety officer (LSO).  Medical personnel responsible for operating your laser systems should be fully trained and educated for operating and working around high power lasers.

The YAG lasers provide many benefits in today’s medical world. Proper knowledge and training around your YAG laser will help your physicians and medical personnel create a safe laser environment.