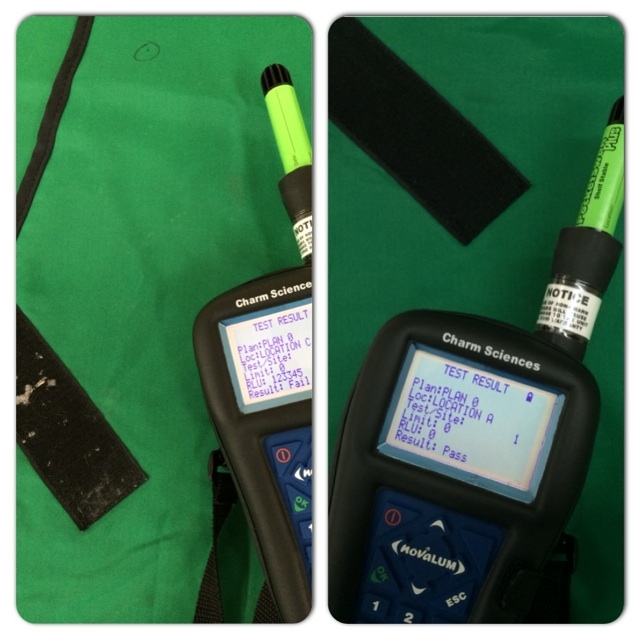 What Does Gold Standard Cleaning Look Like For X-Ray Aprons And Lead Wearables?

Thus far in this lead apron based blog series, we have examined the infection issues and concerns associated with contaminated lead x-ray aprons and the science behind how staff members can easily test such surfaces for contamination using ATP testing.

This third blog entry will examine methodologies and practices utilized by clinical staff and facilities in the “cleaning” and maintenance of these protective lead wearables, and also explore what “cleaning” such a surface really entails. In discussing bioburden levels in the previous blog, we addressed how one cannot judge cleanliness on a surface by appearance alone.  Let’s take a deeper dive into what it means to truly clean and sanitize these protective, lead garments.

In researching the topic, speaking with professionals at symposiums and inquiring with colleagues and peers, there is little consistency across the continuum of care with how these garments are cleaned and/or serviced. Shockingly, a number of Radiology, Cath Lab and Operating Room staff have lamented that such surfaces “never” get cleaned, while other staff and administrators have shared that such surfaces are sometimes cleaned, “when the case load is light on a Friday” or “on the midnight shift by the environmental services department.” Both patient and staff safety are at risk due to lack of staff compliance and clinical efficacy issues posed through improper cleaning practices.

Online research lead to a few administrators sharing that they ran these lead aprons through a cart washer, which lead manufacturing companies clearly advise not to do. Clinicians have also shared that they try to use products such as Lysol or Febreeze to “eliminate the odors” yet admit the lead wearables still aren’t “clean.” One of the more popular concepts considered in attempting to clean and service these wearables entails the discussion of “using sanitizing wipes” on such high-touch surfaces.  Unfortunately, the use of these wipes alone does not properly clean and sanitize the garments.

There are a number of sanitizing/disinfecting wipes on the market that some clinicians claim to use on lead aprons and wearables. When taking a closer look at the labels on these products, one may very well discover that most wipes are actually not recommended for use on lead wearables. Additionally, some wipes contain bleach and corrosive agents, which are both advised not to be used on aprons, according to the companies that manufacture them. A majority of the wipes on the market today are indicated for use on “non-porous” surfaces such as tables, bed rails, door handles, etc. rather than a porous surface such as a nylon covering of a lead wearable. Though the use of wipes might afford convenience to the user, the real issue with doing so lies in their clinical inefficiency in successfully cleaning the surface, not to mention completely removing any bioburden.

If your car had dirt, road tar and bird droppings on it, would you attempt to wax it in that condition?

For best outcomes, you would first clean and remove those elements before attempting to wax the car.  The same is true for other surfaces, including lead wearables.  Professionals who routinely assess bioburden understand the importance of a proper cleaning before sanitizing or disinfecting an item.  If an item is not properly cleaned and organic matter remains, nutrients also  remain to better foster the growth of surviving bacteria or future bacterial contamination.  This is by definition a risk factor for increased hospital associated infections.

All You Can Eat Buffet

In watching the news of late, one can gather that the world of microbiology is ever changing.  Bacteria are highly adept at persisting.  Through changes in their DNA they can gain antibiotic and/or antiseptic resistance, and these changes can happen through mutations or through integration of foreign DNA, but where would they find foreign DNA?  When bacteria die and the cells break open, then the DNA is accessible to the remaining bacteria.

The Problem with Sanitizing and Disinfecting Wipes

When facilities only use wipes on a surface and don’t completely remove the debris, they are in essence creating an “all you can eat buffet” for the surviving bacteria to thrive upon. If the dead bacteria had antibiotic or antiseptic resistance markers, now that DNA is fair game for susceptible bacteria to gain resistance!   In fact, numerous studies have shown that certain bacteria can pick up various genes from different species that makes them more pathogenic (either by making it antibiotic resistant, antiseptic resistant, or by allowing it to survive in a host better).

As if that wasn’t scary enough, what if I told you that some bacteria could gain antibiotic and antiseptic tolerance simply by growing?  (IT IS TRUE!)

Some bacteria can attach to a surface (particularly porous or textured surfaces such as lead wearables) and as they grow and form groups of bacteria (colonies) that can then form a biofilm.  Biofilms are clusters of bacteria that have attached and produced an extracellular polymeric substance (EPS) which are essentially a protective coating.

EPS consists of DNA, proteins, lipids (fats) and polysaccharides (sugars).  This coating protects the bacteria inside the human body from cells that can either tag the bacteria for destruction or destroy the bacteria outright.  Externally (on a surface) it can protect the bacteria from anti-microbial drugs or antiseptic agents.  In fact, bacterial biofilms are 10 – 1,000 times more resistant to antibiotics than there standalone bacterial counterparts.  Their EPS is essentially a bacterial Teflon coating.  This Teflon coating only gets stronger when multiple species of bacteria co-inhabit the same biofilm, and if these attributes weren’t scary enough, bacteria in a biofilm can sense their microenvironment and may even produce toxins while in a biofilm that they wouldn’t normally produce.

Like all living things, biofilms have a life cycle, and a part of that life cycle involves dispersion of some bacteria that are then free to go and attach elsewhere, including in a human host. In 2007, the National Institutes of Health estimated that approximately 80% of chronic infections were biofilm related; thus, biofilms remain a serious problem in many facilities. When surfaces such as the nylon covering of a lead wearable are not cleaned properly, it allows different bacteria to begin to congregate.

Thinking this all sounds like something from a fictional book or movie, as if biofilms can only exist in some weird lab conditions or in some rare disease?  Nope!!!!

The most common example of a biofilm is one that everyone is probably familiar with, but may not realize is a biofilm, is dental plaque!  Biofilms are so hard to remove from surfaces that companies have spent millions of dollars trying to prevent their formation.  If you think about dental plaque, it makes sense.  We brush our teeth twice a day to best prevent plaque.  Unfortunately, when it comes to medical devices or any surface (particularly a porous or textured surface) in a medical treatment facility (such as lead wearables), biofilms can form once the surface is exposed to organic matter such as blood.  Now with the mental picture of layers of bacteria (such as plaque) on surfaces in medical treatment facilities, consider that some high-touch surfaces, such as radiological shields and aprons have not been properly cleaned for years (if ever!)

Biofilms are so tolerant of antimicrobials and antiseptics, that even the CDC positions the best way to remove a biofilm is to disrupt it physically, and they have included the ‘use of friction’ in their definition for proper cleaning.  Studies have been done that show that physically disrupting the biofilm by using friction is the primary means for destruction of the layers and thus removal of the biofilm.  (In the example of dental plaque, this would be equivalent of one going to the dentist and having them scrape the teeth in order to remove the plaque.)  The procedural process and outcomes are different when looking at the process of “cleaning” and “sanitizing” and it takes both of these separate processes to eradicate biofilms from porous, high touch surfaces. The surface on a lead wearable first needs to be cleaned before it can then be sanitized.

Cleaning and Sanitizing really can’t be done in one-step, let alone with just a wipe. When you go to the dentist, the first step in the process is to scrape the plaque from the teeth before they are polished, just like your car needs to be adequately washed and dried, before it can be then waxed. Cleaning and sanitizing of a neglected surface such as a lead apron cannot be accomplished in one step either. In an effort to address such biofilms “head on” X-Ray apron servicing companies, such as Radiological Care Services (IN) are implementing multi-step, cleaning and sanitization programs for X-ray aprons and lead wearables. These programs are built in accordance with governing bodies, such as the CDC, JCAHO, AORN and HFAP, which position that surfaces should first be cleaned, before attempting to sanitize or disinfect them.

Stay tuned for the next follow up blog post, as we look specifically at what policies, regulations and expectations these governing bodies have of high touch surfaces, such as X-ray aprons and lead wearables. Between now and then, go brush your teeth and think about the layers of bacteria building up on lead wearables and aprons as they continue to invite bacteria to the biofilm party!