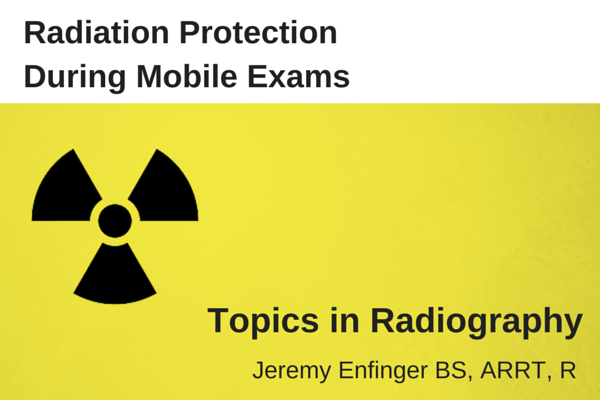 Do you wear a lead apron during portable exams?

I have found in my years of experience as a radiologic technologist that practices vary from one radiologic technologist to the next.  Of course, we utilize some form of radiation protection when it comes to using a c-arm for mobile fluoroscopy in the operating room.  Fewer people wear lead when performing plain film images during surgical procedures.  And most don’t seem to worry about radiation protection during routine portable exams like chest x-rays and abdomen films.

We learn in school that lead shielding is required when performing these exams.  For those of you who do not wear radiation protection for mobile exams, I am about to show you something which may cause you to change the way you prioritize wearing radiation protection apparel.

For some context, I want to step back in time, when Computed Radiography (CR) was first implemented at a hospital I was a clinical instructor for.  My job was to accompany student technologists while they performed their exams and to educate and evaluate.  Having never been to the operating room at that facility, I was given the opportunity to tag along with one of the staff techs who had been observing my student for the day.  They were assigned to perform a cross-table lateral lumbar spine image during a discectomy.

I watched as the staff technologist carefully walked around the table, being mindful of the sterile field, and positioned the draped image receptor next to the patient.  My student used the portable x-ray machine to align a horizontal beam to include the lumbar spine for the prone patient.  When they were finished setting up, they indicated to the O.R. staff in the room that they were ready to expose the image.  All of them, including the physician left the room while the three of us from the radiology department stayed to make the exposure.

We had taken two CR image plates into the room with us.  One was positioned next to the patient, and the other had been placed against the wall behind us.  The student made the exposure, extending the full length of the cable that attached the exposure switch to the portable x-ray machine, which was about 12 feet.  The staff technologist and I backed up to the wall behind us – I would guess an additional 3 feet behind the student technologist who exposed the image.  We all wore lead aprons.

Upon returning to the radiology department to develop the image, the student made a mistake that every technologist has done in their career.  He was carrying both the exposed image plate of the lumbar spine image as well as the unexposed image plate that had been resting against the wall behind us, and he forgot which one was the exposed plate.  The logical solution was to process both image plates under the “lateral lumbar spine” algorithm and discard the image that was not exposed.

The first image was not the lumbar spine image we had hoped it would be.  Instead, something peculiar appeared on the monitor in front of us as the scanner slowly revealed more and more of the image during processing.  Once the entire image had been scanned and the processing the algorithm was applied, it was clear that this was an image of a lower leg (a portion of the tibia and fibula).

Thinking we had come across someone else’s image plate that had been exposed for a different patient (and thankful we did not use that plate to image the lumbar spine), we began asking around the department to see if anyone was missing a tib-fib image from any of their exams.  No one was missing an image.  I decided to examine the image further on a PACS monitor for larger viewing.  The image quality was poor, and the resolution was horrible.  The exposure indicator proved that the image was slightly over-exposed.  I then realized what I was looking at.  This was the cassette that was leaning against the wall in the operating room approximately 15 feet from the patient that was x-rayed.  If you recall, the staff technologist and I had backed up against the wall prior to the exposure being made for the lumbar spine.  This was an image of the staff technologist’s leg, which was positioned just a few inches in front of the image plate during the lumbar spine exposure.  This was purely created by scatter radiation from the exposure we took in surgery.

Here are some examples of images created solely from scatter radiation in an experiment based off of lessons learned from this experience: 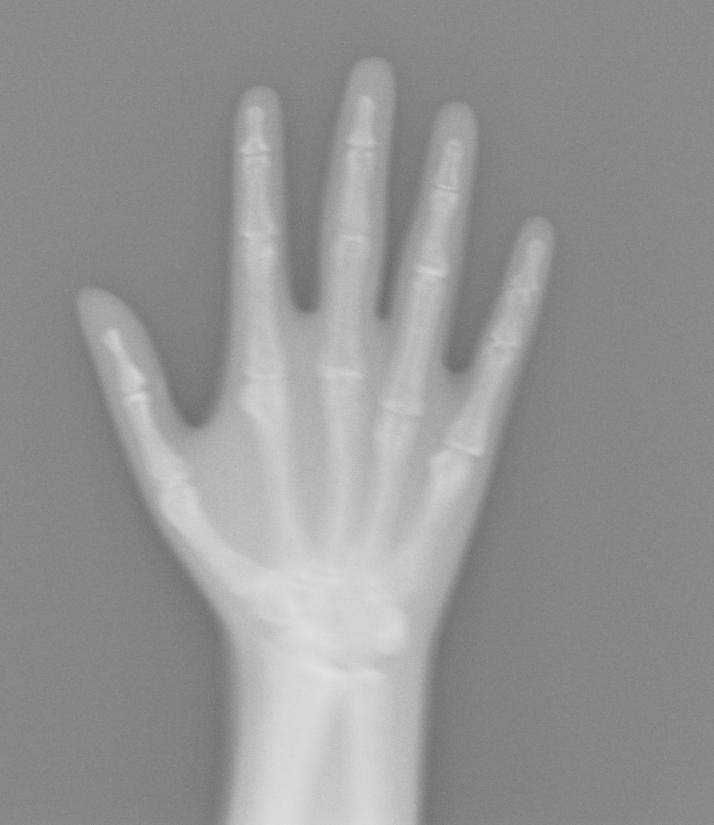 S# was 1190 at 8 foot distance from lateral lumbar spine phantom, which indicates about 1/4 the exposure required to produce a diagnostic hand x-ray 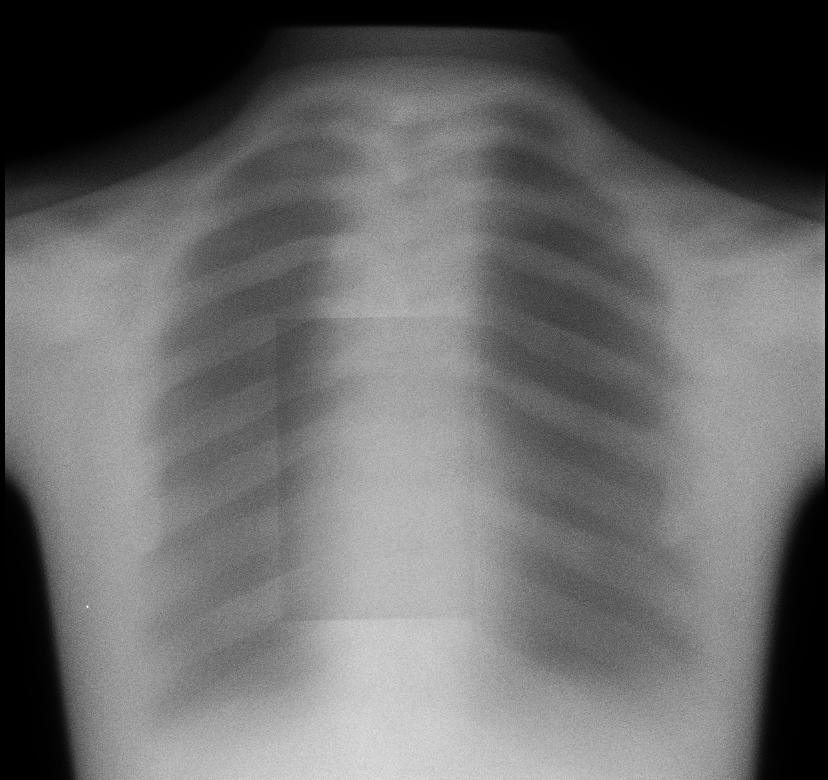 I also decided to x-ray a chest phantom to simulate a portable chest x-ray using 120 kVp and 5 mAs. The following image was created from scatter radiation from about 10 feet away from the chest phantom. 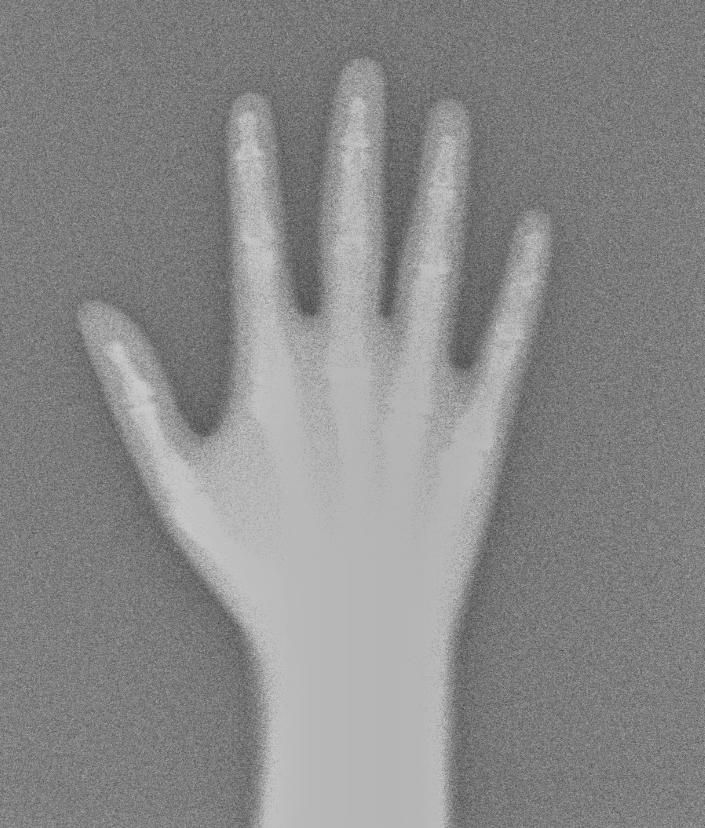 Though the last image produced from the chest phantom didn’t receive nearly the exposure as the one from the lumbar spine phantom, it is still obvious that there is enough radiation to penetrate the fingers from 10 feet away.  Now that you’ve read this and seen evidence of the radiation we work with every day as a radiologic technologist, are you going to change your practices?  If you already use radiation protection for your mobile exams, will you encourage your co-workers and student technologists to adopt these habits?

Registered radiologic technologists vow to keep radiation dose “As Low as Reasonably Achievable” (ALARA).  It is our duty not only to protect patients from the harm that can be caused by radiation, but to protect yourself and your co-workers from it as well.  Let us not forget the three basic principles of radiation protection; time, distance and shielding.  Keep the amount of time you are exposed to radiation low.  Keep as much distance from a radiation source as possible.  And finally, use shielding, including during mobile examinations.  Consistent application of all three of these basic principles of radiation protection will keep you, your patients and your co-workers as safe as possible.

Jeremy Enfinger is an experienced Radiologic Technologist, Radiography Program Instructor, and published author. He has served in leadership roles in hospital, outpatient and academic settings. His experience includes writing examination questions for the national ARRT Radiography Exam and multiple – modality training. He continues to pursue excellence in education and patient care. An avid blogger, Jeremy strives to promote standards of excellence in imaging through his online community with the sharing of veteran tips and techniques for high-quality imaging.

Podcast: How To Communicate Radiation Risks To Patients

What Everyone Should Know About Digital Radiography