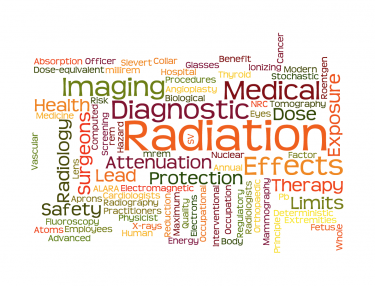 Ionizing radiation is radiation with enough energy so that during an interaction with an atom, it can remove tightly bound electrons from the orbit of an atom, causing the atom to become charged or ionized¹.

X-rays are a type ionizing radiation, which are electromagnetic, indirectly ionizing radiation. X-ray machines and radiation emitting sources are used in hospitals for the diagnosis and treatment of diseases. Hospital employees or “occupational workers” who work in radiology, nuclear medicine, radiation oncology, and some laboratories are specifically trained in the operation of machines that emit radiation as well as the handling of radioactive materials and sources.

Shortly after Wilhelm Roentgen’s discovery of X-rays in 1895 , concern over the biological effects of ionizing radiation began. Over the past 100 years, diagnostic radiology has evolved from the original, unrefined practices to the advanced medical imaging techniques that are now an essential tool for all branches and specialties.

Ionizing radiation provides many benefits, but also has the potential to cause harm to patients and medical personnel. Throughout the years, multiple recommendations regarding occupational exposure limits have been developed by the International Commission on Radiological Protection (ICRP), the U.S. Nuclear Regulatory Commission, and other radiation protection groups. The primary guidelines established have had two principle objectives: 1) to prevent acute exposure; and 2) to limit chronic exposure to “acceptable” levels.

Based on the conservative assumption, current guidelines state that there is no safe level of radiation exposure. Even the smallest exposure to ionizing radiation has some probability of causing a stochastic effect, such as cancer. The ALARA principle is based upon this assumption and has led to the general philosophy of keeping exposures below recommended levels and regulation limits. ALARA is a basic radiation safety principle and means that every reasonable effort must be made to keep the dose to workers and the public “as low as reasonably achievable.”

Regulatory limits for occupational exposure are found in Title 10 Part 20 [Standards For Protection Against Radiation] of the U.S. Nuclear Regulatory Commission, Code of Federal Regulations, and in equivalent state regulations. The annual occupational dose limits have been derived from a study of the observed health effects of radiation on humans and animals during the 20th century². By creating these maximum exposure limits, occupationally exposed radiation workers will be subjected to a level of risk no greater than that in other occupations subject to high safety standards. 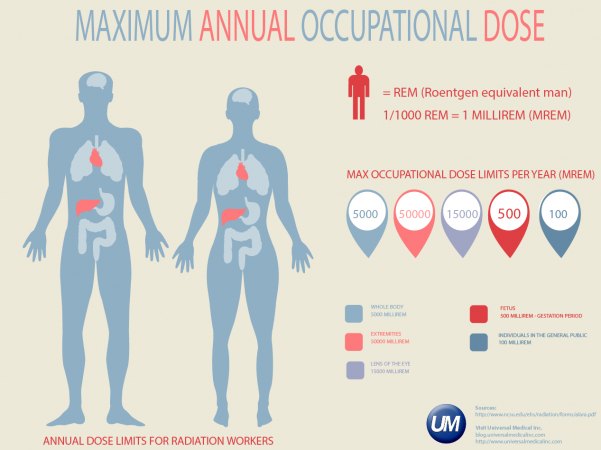 Dose-equivalent or rem is a special unit used for measuring dose in a person.

“The rem is the unit used for equating radiation absorption with biological damage.”

The rem is a rather large unit of measure. Consequently, radiation exposure is generally measured in thousandths of a rem – or a millirem as shown in the table above.

Occupational radiation exposure is recorded in rems or Roentgen equivalent man. The rem factors in the energy absorbed and the relative biological effect on the body due to the different types of radiation (quality factor). The rem is a measure of the relative harm or risk caused by a given dose of radiation when compared to other doses of radiation of any type. Put simply, the rem can be thought of as the unit of biological hazard.

*500 millirem for the fetus is during the gestation period