There are three groupings of naturally occurring radiation, this group is based primarily on the source of the radiation. The first source, primordial or terrestrial radiation comes from soils and rocks. Cosmic or cosmogenic radiation is the second source and originates from the sun and other sources in space. Lastly, human-made radiation, “something created by humans that wouldn’t exist otherwise or something that contains more radiation in it than normal because humans have done something to it.”

According to the Health Physics Society, the average man in the United States receives an effective dose of about 0.3 millisieverts each year from the amount of naturally occurring radionuclides in our bodies. This is about 10 percent of the 3.1 millisievert dose that the average U.S. man who weighs 155 pounds receives each year from all sources of natural background radiation (not including medical sources). 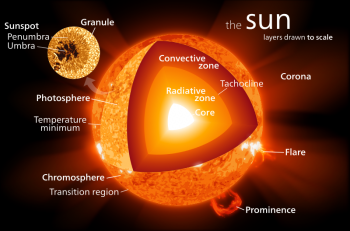 Cosmic radiation is one of the three major sources of naturally occurring radiation and comes from the sun and outer space, consisting of positively charged particles, as well as gamma radiation. The sun, powered by a continuous nuclear reaction, gives off a great deal of radiation. Luckily, most of the energy given off by the sun is intercepted and absorbed by the Earth’s magnetosphere and the ozone layer.

In the United States, the average dose from cosmic radiation is approximately 0.28 millisieverts per year. At higher elevations the dose increases because the amount of atmospheric shielding from cosmic rays is decreased. As exposure rates increase in higher elevations the same principle applies to air travel, flight-crews on long-distance flights can accumulate approximately 30% more annual radiation exposure than the average person.

Terrestrial radiation, a source of naturally occurring radiation, can include a variety of minerals and materials buried in the earth, including potassium-40, thorium-232 and uranium-238 which all have relatively long half-lives. Although not as common, there are materials with shorter half-lives radium-226 (decay product of uranium-238) and radon-222 (which is a product of radon gas).

Radon is a radioactive, colorless, odorless, tasteless noble gas, occurring naturally as an indirect decay product of uranium and thorium that can be found in the soil and rocks beneath homes, in well water, and in building materials. Soil contains radon gas, this gas can seep into homes through cracks and holes in the foundation and accumulating in rooms with poor ventilation. Soils rich in limestone appear to have a higher concentration of radon to release.

Human activities can lead to the introduction of natural radioactive elements. These elements are present in very low concentrations in the earth’s crust and are brought to the surface through human activities such as oil and gas exploration or mining through natural processes like leakage of radon gas into the atmosphere or through dissolution in groundwater. 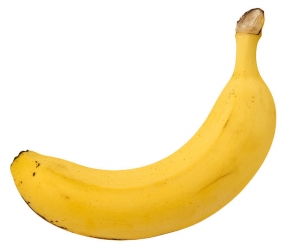 Did you know? Bananas are one of the most commonly encountered sources of naturally occurring radiation. Bananas are an excellent source of potassium, as a result of naturally being very high in potassium, bananas contain a higher than normal amount of potassium-40 (a radioactive isotope). But please, don’t go throwing out your bananas. By eating one banana you are exposed to 0.1 microsieverts, to put this in perspective, one arm x-ray is equal to 1 microservient. You may have heard the term “banana equivalent dose” when communicating radiation exposure.

Bananas are not the only foods that contain potassium-40, carrots and white potatoes carry slightly lower levels of the radioactive isotope. However, lima beans contain approximately 50% more potassium-40 than bananas and trace amounts of radon-224. While all these foods contain levels of naturally occurring radiation, the levels are extremely low and not considered harmful. An interesting fact about these foods, is that while they may contain small amounts of natural radiation, virtually none of the radioactive material consumed is retained in the body. Now, there is no excuse not to eat your fruits and vegetables.

If you are curious about other sources of radiation and the levels of radiation emitted, take a look at this handy radiation dose chart that was created by Randall Munroe. As Randall clearly states, the radiation dose chart is for general education and continues by adding a humorous caveat that “if you’re basing your radiation safety procedures on an internet PNG image and things go wrong, you have no one to blame but yourself.” If you have any questions or comments on radiation safety protection products, feel free to leave a comment below or connect with us on twitter.